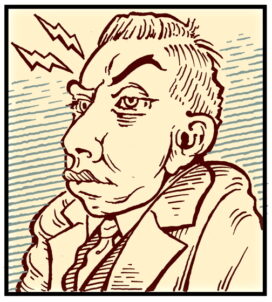 An essayist and intellectual who lived in Greenwich Village, Randolph Bourne is an early figure of America’s “bohemian” counterculture. Randolph Bourne was maimed by forceps during his birth, giving him a disfigured face; spinal tuberculosis at age 4 left him a hunchback. Bourne graduated from Columbia University in 1913 and joined the staff of The New Republic, where he made a name for himself as left-leaning essayist and intellectual. He was an outspoken critic of World War I even after America entered the war, a position which made him highly unpopular. He died in the influenza epidemic of 1918, shortly after the war ended. His best-known work is Youth and Life (1913).

Something in Common with Randolph Bourne