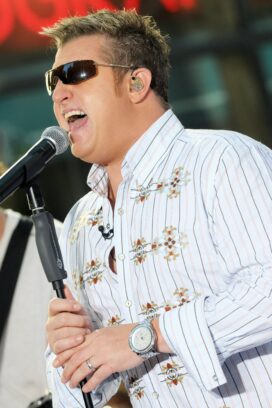 Rascal Flatts shot to stardom with their debut album in 2000, and the success of their next releases, Melt and Feels Like Today, made them one of country music’s top-selling acts by the end of 2004. Famous for their vocal harmonies, the band is made up of Gary LeVox (b. 10 July 1970, Columbus, Ohio), Jay DeMarcus (b. 26 April 1971, Columbus, Ohio) and Joe Don Rooney (b. 13 September 1975, Baxter Springs, Kansas). LeVox and DeMarcus are second cousins who grew up in Ohio. DeMarcus moved to Nashville in 1992, LeVox followed in 1997 and the duo began performing in clubs. They were eventually joined by Rooney, who DeMarcus met while playing in a band for Chely Wright. Their first album yielded the hits “Prayin’ for Daylight” and “I’m Movin’ On.” Their second album, released in 2002, included the hits “Love You Out Loud” and “Mayberry,” and their third album, released in 2004 was an immediate hit. Despite early criticism that they were a “boy band” who were more pop than country, Rascal Flatts earned the respect of the industry and became perennial nominees for all the major country music awards (they’ve won multiple CMA awards for best vocal group). Their 2005 release, Feels Like Today, earned them four nominations from the Academy of Country Music, including one for “Skin (Sarabeth)” as song of the year, and since then their albums Me and My Gang (2006), Still Feels Good (2007) and Unstoppable (2009) have all started off at the top of the charts. Other hit singles include “Here” and “Every Day.”

Their backing band while on tour is Mr. Nasty… Rooney caused a bit of a stir when he showed his bare bottom in the music video for their hit “I Melt”… Rascal Flatts sang the song “Walk the Llama Llama” for Sting‘s soundtrack to the animated feature The Emperor’s New Groove (2000).

Something in Common with Rascal Flatts