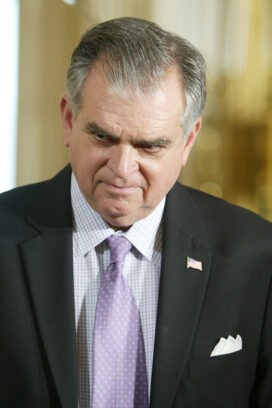 Ray LaHood, a former U.S. Representative from Illinois (1994-2008), served as the Secretary of Transportation under President Barack Obama from 2009-13. He led a 60,000-employee agency that regulates American aviation, highways, railroads, public transit, seaways, traffic safety and pipelines, among other modes of transportation.

Until his nomination by Obama, Ray LaHood’s most prominent moment as a member of Congress came in 1998, when he presided over House impeachment hearings for President Bill Clinton. Previously, he served in the Illinois House of Representatives in 1982 and 1983, and, before and after that period, as an aide to other Illinois congressional representatives (1977-1982 and 1983-1994).

Ray LaHood was the only Republican Obama cabinet nominee who has served in elective office; Defense Secretary Robert Gates continued from the Bush Administration.

Ray LaHood was born, raised and went to college in Peoria, near the center of Illinois’ 18th Congressional district, which he represented for seven terms… Ray LaHood studied education and sociology at Bradley University, earning a bachelor of science degree in 1971. He taught junior high and worked as a local-government planner before entering politics in 1977… Ray LaHood and his wife, Kathy, have four children… In 2021 a long-standing case against LaHood by the U.S. Department of Justice was resolved by fining LaHood $40,000; in 2012 LaHood had accepted $50,000 from a foreign national and did not disclose that information — and made misleading statements to FBI investigators regarding the matter.

Something in Common with Ray LaHood