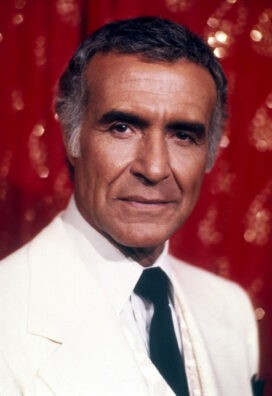 Among television viewers, Ricardo Montalban is remembered as Mr. Roarke, the mysterious white-suited host of the TV drama Fantasy Island, and as a pitchman for the “soft Corinthian leather” of the luxury Chrysler Cordoba.

Ricardo Montalban was one of a handful of Latin leading men who broke into Hollywood movies in the 1940s and 1950s, though he was often cast as an Arab, a Native American or in other ethnic roles. Montalban also played creepy superdude Khan, Captain James T. Kirk‘s nemesis in a famous 1967 episode of TV’s Star Trek, and he reprised the role in a 1982 movie, The Wrath of Khan.

But it was his Fantasy Island turn as Mr. Roarke — dapper and all-knowing, assisted by the teensy aide-de-camp Tattoo (played by Herve Villechaize) — that made him a star during its run from 1978-1984. He also played Grandfather in Spy Kids 2 (2002) and Spy Kids 3 (2003). He was given a Lifetime Achievement Award by the Screen Actors Guild in 1994.

Something in Common with Ricardo Montalban