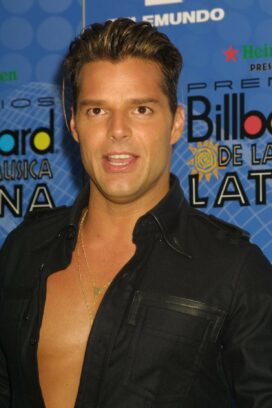 Ricky Martin’s exuberant 1999 single "Livin’ La Vida Loca" made him an avatar of dancable, hip-swiveling Latin pop. Martin got his start with the all-boy pop group Menudo; after five years with the group, he released his Spanish-language solo album, Ricky Martin, in 1991. He also acted on stage and on TV in Mexico, becoming a modest star there. In 1994 he jumped to the American TV soap opera General Hospital, playing a Puerto Rican singer. In 1999, after several albums in Spanish, he released his first English-language album (also titled Ricky Martin), which included the salsa-style "Livin’ La Vida Loca." The album sold 17 million copies and put Martin on the map for good. His other albums include A Medio Vivir (1995), Vuelve (1998), Sound Loaded (2000, with the hit “She Bangs”), Life (2005), and the compilation album Ricky Martin 17 (2008). In 2010 Martin announced that he was a “fortunate homosexual man,” ending years of fan speculation on the topic.

Martin’s twin sons, Matteo and Valentino, were born via a surrogate mother in 2008… Martin co-owns a Miami restaurant, Casa Salsa… He received a star on the Hollywood Walk of Fame in 2007.

Something in Common with Ricky Martin