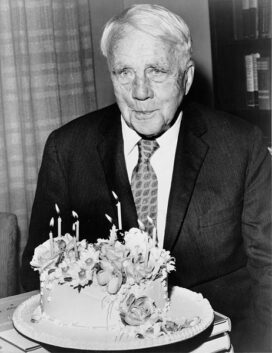 Flinty, moody, plainspoken, and deep, Robert Frost was one of America’s most popular 20th-century poets. He won the Pulitzer Prize for poetry a remarkable four times.

Robert Frost was farming in Derry, New Hampshire when, at the age of 38, he sold the farm, uprooted his family and moved to England, where he devoted himself to his poetry. His first two books of verse, A Boy’s Will (1913) and North of Boston (1914), were immediate successes.

In 1915 he returned to the United States and continued to write while living in New Hampshire and then Vermont. His pastoral images of apple trees and stone fences — along with his solitary, man-of-few-words poetic voice — helped define the modern image of rural New England.

Frost’s poems include “Mending Wall” (“Good fences make good neighbors”), “Stopping by Woods on a Snowy Evening” (“Whose woods these are I think I know”), and perhaps his most famous work, “The Road Not Taken” (“Two roads diverged in a wood, and I– / I took the one less traveled by, / And that has made all the difference”).

Robert Frost recited his poem “The Gift Outright” at the 1961 inauguration of John F. Kennedy… Robert Frost attended both Dartmouth College and Harvard, but did not graduate from either school… Robert Frost preferred traditional rhyme and meter in poetry; his famous dismissal of free verse was, “I’d just as soon play tennis with the net down.”

Something in Common with Robert Frost