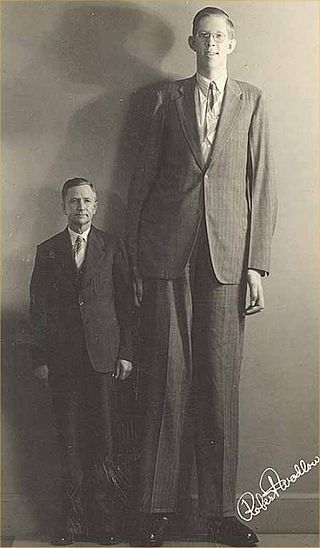 Robert Pershing Wadlow was, for much of his brief life, the world’s tallest man. He was 8 feet and 11 inches tall (roughly 2.72 meters) when he died at age 22.

At birth, Robert Wadlow was of normal size and weight: 8 pounds, 6 ounces, according to his hometown Alton Museum of History. But during his childhood, pituitary problems led to his outsized growth. By age eight he was 6 feet tall; at age 16 he passed the 8-foot mark and weighed over 370 pounds.

He graduated from high school with his class in 1936, and in his early adulthood Wadlow toured as a goodwill ambassador for the International Shoe Company. Because of his great size, however, he couldn’t feel his feet well; that led to a blister, which became infected and killed him at the age of 22.

After his death, Robert Wadlow gained extra fame from his annual listing as the world’s tallest man in the Guinness Book of World Records.

Robert Wadlow was the only person in his family who had unusual height, according to the Alton Museum of History. He had two sisters, Betty and Helen, and two brothers, Eugene and Harold Jr., all of whom were normal size and weight… The tallest woman recorded in modern times was Zeng Jinlian of China (1964- 1982) who was 8’1″ tall at her death from cerebral hemorrhage at age 18; as with Wadlow, her extreme growth was caused by a pituitary abnormality.