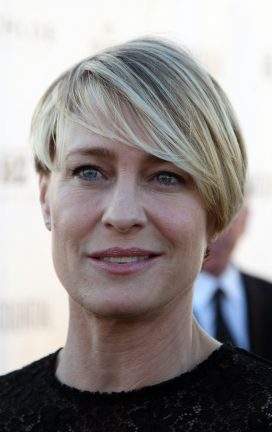 Before Robin Wright became a star as a lead player in the Netflix series House of Cards, she was known to moviegoers as Buttercup from The Princess Bride and the love interest in Forrest Gump.

Wright got into acting by way of modeling, and her first gig was a two-year stint on the soap opera Santa Barbara, which earned her three Daytime Emmy nominations. Her part in The Princess Bride (1987) was her first big movie break, and over the years she’s been in dozens of movies, mostly in supporting roles.

For 14 years she was married to Sean Penn, her co-star from 1990’s State of Grace. She changed her name to Robin Wright Penn and starred in Penn-directed films, including The Crossing Guard (1995) and The Pledge (2001), but her career took a back seat while Penn was a box office star. They divorced in 2001 and have two children.

Wright won over the public and critics alike as Claire Underwood in House of Cards, taking the spotlight with series star Kevin Spacey and gathering four straight Emmy nominations as outstanding lead actress.

Robin Wright is also a well-known social activist and the founder of the Robin Wright Foundation; much of her work is done in Africa… For three years she dated actor Ben Foster.

Something in Common with Robin Wright