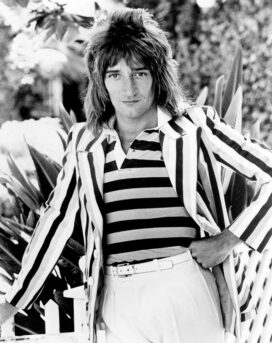 Pop singer Rod Stewart has been making hit records since the 1970s, including “Maggie May,” “Tonight’s the Night (Gonna Be Alright),” “Do Ya Think I’m Sexy?” and “All For Love.” A London native who considers himself a Scot, his distinctive raspy vocals made him a stand-out early on in his career, especially during a brief stint with the Jeff Beck Group and then with The Small Faces (later dubbed The Faces). While with The Faces Stewart signed his own record deal, and for the first half of the 1970s he released records on his own as well as with the group. His solo successes, including “Maggie May” and “You Wear It Well,” eventually led to a break with the band, and Stewart went on to sell millions of records during the 1980s and ’90s. Known for his mop of hair and penchant for pop fashion, “Rod the Mod” has long been a favorite of celebrity-watchers, thanks in large part to his love life, from relationships with actress Britt Ekland and model Kelly Emberg to his marriage with supermodel Rachel Hunter (married since 1990, they split up in 1999 and finally divorced in 2006). Now less a rocker and more a crooner of ballads, Stewart’s other albums include When We Were The New Boys (1998), Human (2001) and It Had To Be You: The Great American Songbook (2002).

Something in Common with Rod Stewart