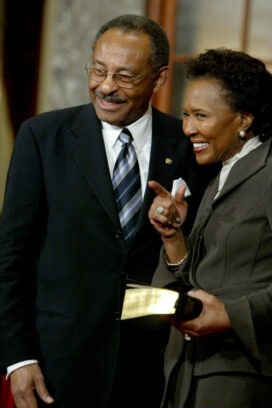 Roland W. Burris joined the U.S. Senate in 2009 under the cloud surrounding Illinois governor Rod Blagojevich, who appointed Burris just before being removed from office. Burris, an attorney with a background in banking, got started in Illinois politics in 1973, when he was appointed by then-Governor Dan Walker to a state budget post. Burris was elected state comptroller in 1978, becoming the first African-American to be elected to a major statewide position in Illinois. He served three terms (1979-91), then won election as attorney general and served one term (1991-95). Burris lost the Democratic nomination for governor in 2002 to Blagojevich, but worked briefly with the gubernatorial transition team.

After Senator Barack Obama was elected president in 2008, Blagojevich had the right to select Obama’s replacement. But the governor was arrested by federal agents on 9 December 2008 and charged with trying to peddle the appointment to the highest bidder. Blagojevich was impeached and removed from office, but before his removal he appointed Burris to the U.S. Senate on 30 December 2008. At first denied the seat due to certification issues and political drama, Burris took his seat on 15 January 2009, but questions about his appointment didn’t go away. Burris told what has been generously called an “evolving story” about his connection to Blagojevich, first saying he’d had no contact with the governor about the Senate seat, then later admitting there had been some contact. Amid calls for his resignation from prominent Democrats, including Illinois governor Patrick Quinn (who replaced Blagojevich), Burris has maintained that his appointment was legitimate, and that his explanations had been misconstrued by the press. Burris was given a letter of admonishment from the Senate ethics committee in November of 2009. Burris did not run for reelection in 2010 and will leave office in January of 2011.

Burris has already built a granite mausoleum for himself and his wife in Chicago’s Oak Woods Cemetery; the crypt is chiseled with a list of his accomplishments under the heading “Trail Blazer.”

Something in Common with Roland W. Burris