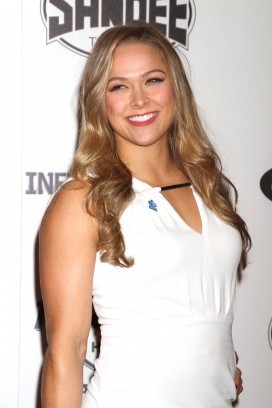 Ronda “Rowdy” Rousey is a World Junior Judo Champion and a past multi-time winner and champion in the women’s Ultimate Fighting Championship, or UFC.

Ronda Rousey was only 17 years old when she won a gold medal at the 2004 World Junior Judo Championships; that same year she qualified for the Olympic Games in Athens. She won her second Junior World championship in 2006, and a gold medal at the Pan American Games in 2007. At the Olympics in Beijing in 2008, Rousey won a bronze media, making her the first American to win a medal in women’s judo. After retiring from judo, she made her amateur debut in mixed martial arts competition in 2010.

By 2012, she was the Strikeforce Women’s Bantamweight Champion and the first woman fighter to join the UFC (Ultimate Fighting Championship). Fighting at 135 pounds, Rousey became the Women’s Bantamweight Champion in 2013 and defended her title in six straight bouts, including a 2014 victory over Alexis Davis in a fight that lasted only 16 seconds.

Ronda Rousey’s successes made her famous; Forbes magazine named her one of the 10 highest-earning female athletes in 2015 and 2016, with estimated fight and endorsement earnings of $6.5 million in 2014-15 and $14 million in 2015-16; she endorsed companies including Carl’s Jr., Reebok, Bud Light, Buffalo Jeans and Pantene hair care products. In addition to fighting, she began an acting career in 2014, appearing in The Expendables 3 (starring Sylvester Stallone).

She suffered a surprise loss at UFC 193 in Melbourne, Australia on November 14, 2015, when she was knocked out in the second round by Holly Holm. In her next fight, on December 30, 2016, she suffered an even worse loss to bantamweight Amanda Nunes, being battered to a TKO in a fight that lasted just 48 seconds.

Something in Common with Ronda Rousey