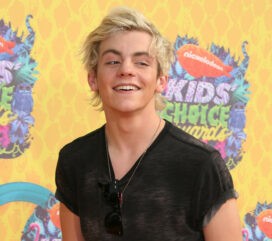 Actor and Ross Lynch is one star of the Disney Channel series Austin & Ally, a comedy about a boy singer and a girl songwriter who form an unlikely partnership in the hopes of achieving success as entertainers. Lynch is the youngest of five children and spent his early years in Colorado. The family moved to Los Angeles when he was a pre-teen to help the entertainment career of his older brother, Riker. The kids formed a band in 2009 called R5 (Ross, Riker, Rydel, Rocky and Ryland), with Ross on guitar and vocals. They released a short record, Ready Set Rock, in 2010 on their own, and by 2012 R5 had a record deal. At the same time, Ross Lynch was beginning to get acting work. He landed the lead role of Disney’s Austin in 2011, co-starring with Laura Marano (Ally), and the show became a popular feature for young viewers in 2012 and 2013. Lynch sang on the show’s soundtrack release in 2012, the same year he released the single “Heard It on the Radio” and began filming the TV movie Teen Beach Movie.

Something in Common with Ross Lynch