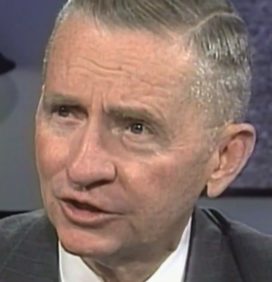 Ross Perot was the businessman who ran for president as an independent in 1992 and 1996, runs which may have led to the election and re-election of Bill Clinton.

Ross Perot was a salesman for IBM when he founded Electronic Data Systems in 1962. Perot managed to turn EDS into a multi-billion dollar corporation, becoming one of America’s richest men.

He also maintained a friendship with the U.S. Department of Defense, and from 1969 to 1972 worked to get American POWs out of Southeast Asia. In 1979, Ross Perot participated in a private mission to Iran to rescue two hostages who were employees of EDS.

Perot was a surprise candidate in the U.S. presidential elections of 1992, running as an independent (under the banner of the newly-created group United We Stand America) against Republican president George Bush and Democratic candidate Bill Clinton. Pundits made fun of Perot’s short stature and big ears, but he struck a nerve with a folksy, straight-talking image that reminded some people of Harry Truman.

Perot earned 19% of the popular vote, but won no electoral votes and earned the enmity of those who blame him for a Clinton win (he drew conservative votes away from George Bush, the argument goes). Ross Perot ran again in 1996 with less success, this time under the banner of the Reform Party.

During the 1992 election, Ross Perot often charmed supporters by dancing onstage with his wife to Patsy Cline‘s tune “Crazy”… Former pro wrestler Jesse Ventura was elected governor of Minnesota as a Reform Party candidate in 1998.

Something in Common with Ross Perot