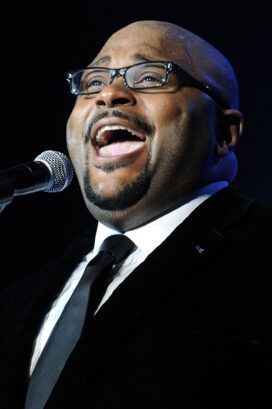 Ruben Studdard won the 2003 edition of the TV talent competition American Idol. The show offered 36 unknown singers a chance at stardom; home viewers voted contestants off the show each week until only Studdard remained as the winner. Weighing in at over 300 pounds, Studdard was a crowd-pleasing contrast to the skinny beauties normally associated with the show; his size and charm earned him the nicknames “The Round Mound of Sound” and “The Velvet Teddy Bear.” Studdard’s win (on 21 May 2003) automatically earned Studdard a million-dollar recording deal and management contract from the show. He became a regular figure on TV talk shows and the pop music scene, as did his final competitor and runner-up, Clay Aiken. His albums include Soulful (2003), I Need an Angel (2004) and The Return (2006). He toured in 2008 with a revival of Ain’t Misbehavin’ (playing Fats Waller).

It was first reported that Studdard beat Aiken by only about 1340 votes out of 24 million votes cast, but the margin was later corrected to 134,000… During his American Idol appearances, Studdard wore sports jerseys with the number 205, the telephone area code of his hometown of Birmingham, Alabama; he later got into a legal dispute with the clothing company 205 Flava, which said it had secretly paid him to wear their jerseys on the show… American Idol is a spinoff of the British original, which was called Pop Idol.

Something in Common with Ruben Studdard