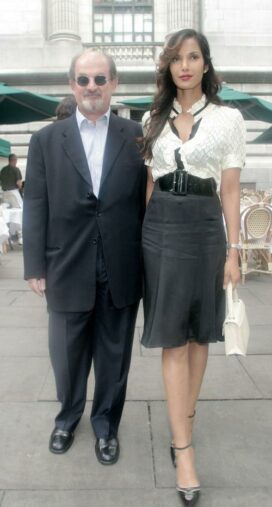 Salman Rushdie is an Indian-born English novelist and critic, famous for fantastical novels about the post-colonial relationship between cultures of the East and West. Raised in India and Pakistan, he was educated in England and emigrated there in 1965. A graduate of Cambridge University (1968), Rushdie worked as an actor and in advertising until the success of his second novel, Midnight’s Children (1981, Booker Prize), allowed him to work as a writer full-time. That novel cemented Rushdie’s literary fame, but he became even more famous for the controversy stirred by his 1988 novel The Satanic Verses. Rushdie’s depiction of Muhammad and other Islamic figures in the book offended some members of Islam, and the novel was banned in India soon after its publication. Iran’s political and religious leader, Ayatollah Ruhollah Khomeini, issued a fatwa on 14 February 1989, declaring that Muslims should kill Rushdie for defaming Muhammad and insulting Islam. The order was not rescinded by Iran until 1998, and Rushdie for many years avoided the public and had police protection when he travelled. After the publication of his novel, The Moor’s Last Sigh (1995, Whitbread Prize), he became a public figure once again, and has since published novels, story collections and essays that challenge cultural conventions of both the East and the West. Despite decades of sharp criticism of the British government, Rushdie was made a Knight Bachelor in June of 2007 and is now referred to as Sir Ahmed Salman Rushdie. The announcement of his knighthood rekindled the ire of strident Islamic groups in Iran, Pakistan and Malaysia. His other novels include Shame (1983), The Ground Beneath Her Feet (1999) and Shalimar the Clown (2005).

Something in Common with Salman Rushdie