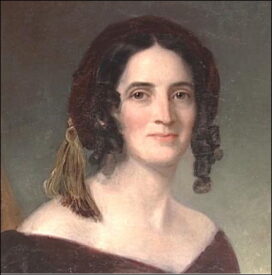 Sarah Childress Polk was married to United States president James K. Polk and served as First Lady from 1845 to 1849. From a prosperous Tennessee family, she was educated in Nashville, Tennessee and Salem, North Carolina. She married Polk in 1824 and became his lifelong political partner, working as his personal secretary and adviser while he served as a member of Tennessee’s legislature (1823-25), a member of the U.S. House of Representatives (1825-39) and the governor of Tennessee (1939-41). The Polks moved into the White House in 1845, and First Lady Sarah, a devout Presbyterian, toned down White House parties by restricting dancing, gambling and alcohol. She also continued to help her husband with political matters, handling his correspondence and directing his attention to matters she deemed important. After the White House they returned to their estate in Nashville, but James died a few months later. Sarah spent the next four decades in Nashville wearing widow’s black. Until 1860 she concerned herself with running the family plantation in Mississippi, and during the Civil War she and her Nashville home were neutral territory. Although the Polks had no children, in 1852 Sarah took on the duties of raising her niece, Sally Jetton.

Something in Common with Sarah Childress Polk