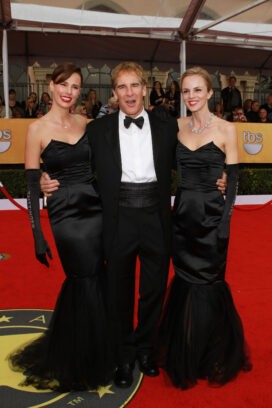 Scott Bakula starred in the science fiction TV series Quantum Leap, which ran on NBC from 1989-93. Bakula played Dr. Sam Beckett, a scientist trapped in an experiment gone wrong which had him “leaping” from life to life across time. The show was a hit (despite frequent schedule changes) and developed a loyal following. Bakula is primarily known as a television actor, but he has also appeared on Broadway, produced several TV shows, and appeared in feature films including Lord of Illusions (1995), American Beauty (1999, with Kevin Spacey), and Life As a House (2001, with Kristin Scott Thomas). Bakula starred as Captain Jonathan Archer in TV’s Enterprise, a spin-off prequel in the Star Trek series, from 2001-05.

Bakula’s Broadway shows include the musical Romance / Romance (1988-89) and the short-lived Marilyn (1983, with Bakula as Joe DiMaggio).

Something in Common with Scott Bakula