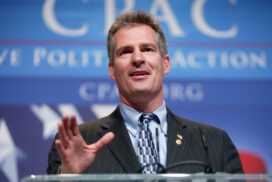 Scott Brown is the Republican from Massachusetts who in 2010 won the U.S. Senate seat held for 47 years by Democrat Ted Kennedy.

Scott Brown’s victory over Martha Coakley was a major upset and ended the Democratic 60-40 majority in the U.S. Senate.

Brown graduated from Tufts University in 1981 and Boston College Law School in 1985. While attending college he also modelled for clients including Marshall’s department stores and Jordache jeans. (He appeared nude in Cosmopolitan in 1982 after winning the magazine’s ‘America’s Sexiest Man’ contest.)

Brown grew interested in politics and in 1992 was elected as assessor for Wrentham, Massachusetts.

He was elected to the state’s house of representatives in 1998, then to the state senate in 2004 before challenging Coakley in 2010.

Scott Brown campaigned against big government and high taxes and talked tough about terrorists, saying “our tax dollars should pay for weapons to stop them, not lawyers to defend them.”

At first a heavy underdog, Brown gained steam as he ran and swooped to victory over Coakley on 19 January 2010 with about 52% of the vote. He was sworn into office as senator on 4 February 2010. He ran for a full term in 2012, but was defeated by Democratic consumer activist Elizabeth Warren.

After the election loss, Brown joined Fox News as an on-air consultant, and moved to New Hampshire to establish residency for a run at that state’s Senate seat. He lost the 2014 election to incumbent Senator Jeanne Shaheen, a Democrat.

An early supporter of Donald Trump‘s presidential bid, Scott Brown was named Ambassador to New Zealand under the Trump presidency in 2017.

Scott Brown married his wife, Gail Huff, in 1986. She began working as a reporter for Boston TV station WCVB in 1993. They have two daughters, Ayla (b. 1988) and Arianna (b. circa 1990). At the time of Scott Brown’s election, Arianna was attending Syracuse University and Ayla was at Boston College. Ayla played on the BC basketball team and also was a semi-finalist on the TV show American Idol in 2006. She released the album Forward in 2006… Scott Brown joined the Massachusetts National Guard in 1979 and over the next three decades rose to the rank of Lt. Colonel in the Judge Advocate Generals (JAG) Corps.

Something in Common with Scott Brown