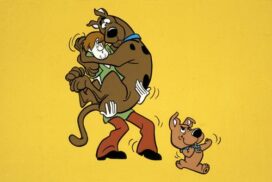 Persistent puppy Scrappy-Doo was a late addition to the cast of the popular Saturday morning cartoon series Scooby-Doo. Scooby-Doo, Where Are You? premiered in 1969 and remained on the air in various incarnations through the 1970s. In 1979 The Scooby and Scrappy-Doo Show introduced Scrappy-Doo, a tiny Great Dane pup who was the nephew of show’s star. In theory, Scrappy was supposed to be daring and headstrong where Scooby was comically nervous and lily-livered. In practice, many viewers were annoyed by Scrappy and his signature yelp of “Puppy power!”, and Scrappy became the character fans loved to hate.

Scrappy-Doo was voiced by actor Lenny Weinrib and later by Don Messick (who also voiced Scooby)… As with literary whale Moby-Dick, Scrappy-Doo’s name is officially hyphenated but more commonly spelled without the hyphen.