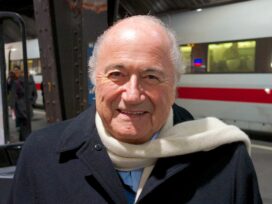 Sepp Blatter was the president of FIFA, the powerful international soccer organization, from 1998 until his abrupt resignation amidst scandal in 2015.

Sepp Blatter was born in Switzerland, played soccer (football) in Swiss amateur leagues, and earned a degree in business administration and economics from the University of Lausanne in 1959.

He worked in public relations for the tourism board of the Swiss canton of Valais, and for the watchmaker Longines, before joining FIFA as technical director in 1975.

Blatter moved up to the job of secretary general of FIFA in 1981, serving as the right-hand man of longtime president João Havelange. When Havelange stepped down amidst charges of corruption in 1998, Blatter was elected president of FIFA.

As president, Blatter ruled with a dictatorial style as he cemented soccer’s position as the world’s dominant sport. He has dealt with (or ignored) regular accusations of corruption throughout FIFA’s leadership, including rumors of envelopes stuffed with cash, rigged votes, and charges that Russia and Qatar bribed their way to selection as the World Cup host countries for 2018 and 2022.

Still, Blatter stayed on top thanks to his political savvy and willingness to spread the wealth from FIFA’s massive World Cup revenues in exchange for support from FIFA’s smaller member countries.

Just before the 2015 vote, FIFA was rocked by scandal when 14 top FIFA officials were arrested and charged by the U.S. government with racketeering, fraud and money laundering.

Blatter was not himself arrested or charged, and two days later he was again re-elected as FIFA president.

But four days after that, on June 2, 2015, Sepp Blatter announced at a news conference that he would resign, saying “”For years, we have worked hard to put in place administrative reforms, but it is plain to me that while these must continue, they are not enough… We need deep-rooted structural change.”

In November of 2012, after a six year investigation, Swiss authorities indicted Blatter on fraud charges.

FIFA stands for Fédération Internationale de Football Association; the group was founded in 1904 and Sepp Blatter is the eighth person to be its president… Sepp Blatter has been married three times and has one daughter from his first marriage, according to Focus Magazine… Sepp Blatter was played by actor Tim Roth in the biopic United Passions; the film was widely panned and criticized as a $28 million vanity project for Blatter after being show at Cannes in 2014. Peter Bradshaw of The Guardian said the film was ”like a weird mixture of Chariots of Fire and The Godfather”… Sepp is a nickname, short for Blatter’s birth name of Joseph.

Something in Common with Sepp Blatter