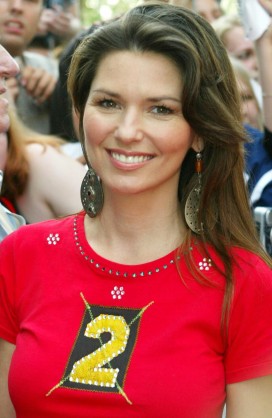 Shania Twain is 54 years old
Born: August 28, 1965
Birthplace: Windsor, Ontario, Canada
Best known as: Singer of the pop hit "You're Still The One"
Buy from Amazon.com: Music by Shania Twain

Cheerful and with occasional thoughts from Shania

2011 report from People.com, with links to past stories

Full professional bio of Twain, plus a discography and links to related artist

Shania Twain released her eponymous debut album in 1993, the same year she married superstar music producer Robert “Mutt” Lange. Five years later Shania Twain was one of country music’s biggest stars thanks to talent, charisma, and a va-va-voom body lavishly displayed at every opportunity. Her 1995 album The Woman in Me won the Grammy Award for best country album and eventually sold over 12 million copies. Her 1997 follow-up Come On Over sold even more and confirmed her superstar status through hit singles like “You’re Still the One,” “That Don’t Impress Me Much” and “Man! I Feel Like a Woman.” Early in her career Shania Twain was a controversial figure among country music purists, some of whom felt her made-for-video musical style was too close to MTV pop, but such criticism was ultimately buried beneath her overwhelming success. Her 2002 album Up! sold two million copies in the U.S. in its first month of release. She released a greatest hits album in 2004.

Shania Twain and Mutt Lange separated in 2008 and were divorced in 2010. Their son, Eja D’Angelo, was born in 2001… She married Frederic Thiebaud on New Year’s Day of 2011. In a curious romantic twist, Thiebaud is the ex-husband of Marie-Anne Thiebaud, who had been a close friend of Shania Twain until Marie-Anne and Mutt Lange began an affair which broke up both marriages… Shania Twain was born Eileen Edwards, but later took her stepfather’s last name… She changed her first name to “Shania” in 1990; it reputedly means “I’m on my way” in the Ojibway language.

Something in Common with Shania Twain