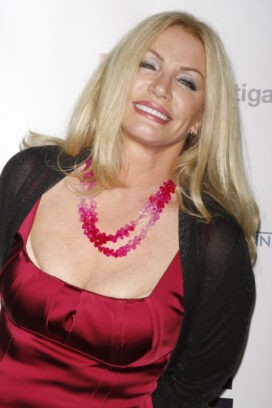 Shannon Tweed is best known for her long run on the “reality” show Gene Simmons Family Jewels from 2006-2012.

First known as Playboy magazine’s Playmate of the Year in 1982, Shannon Tweed went on to carve out a career in B movies and reality TV. Tweed was the longtime companion of rock star Gene Simmons, of the group KISS, when they began starring together in the TV reality show Gene Simmons Family Jewels in 2006. The cable show, which ran for 158 episodes, featured the antics of Simmons, Tweed, and their teenaged children. Though Simmons’s official site described them as “happily unmarried” in the past, the pair actually did marry on October 1, 2011.

Shannon Tweed’s films have included Cannibal Women in the Avocado Jungle of Death (1989), Possessed by the Night (1994), and Bimbo Movie Bash (1997). Her autobiography, Kiss and Tell, was published in 2006.

Something in Common with Shannon Tweed