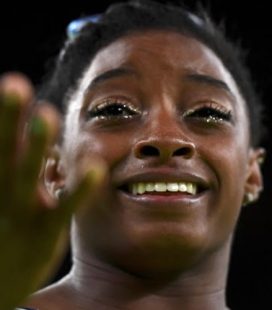 Stats and videos from USA Gymnastics

Simone Biles is the Best

May 2016 profile from The New Yorker

Video of her 2016 performance in Rio

Simone Biles is a four-time Olympic gold medalist and the first African American to win the world all-around gymnastics title, which she did in 2013, 2014 and 2015.

Raised by her grandparents after being placed in a foster home, Simone Biles began competing in gymnastics in 2011 and quickly shot to the top of the American rankings. After her winning run of world championships, she decided to turn professional in 2015. Going into the 2016 Olympics in Rio de Janeiro, she was the favorite, having been three-time all-around champion and three-time floor champion.

She didn’t disappoint in Rio, winning an Olympic bronze medal in the balance beam and four Olympic gold medals in the vault, the floor exercise, the team all-around event and the individual all-around event, cementing her status as one of the best gymnasts in history. She was picked to carry the United States flag in the closing ceremonies for those Olympics.

After taking almost two years off, Biles returned for the 2018 U.S. Gymnastic Championships and won gold medals in all four of her events, as well as a record fifth all-around title.

Simone Biles committed to attend UCLA in 2014, but decided to defer entry until after the Rio Olympics. Her teammates on the 2016 Olympic team were Gabby Douglas, Laurie Hernandez, Madison Kocian and Aly Raisman.

Something in Common with Simone Biles