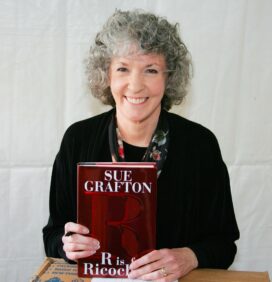 Sue Grafton began her writing career while she was a working mother in the 1960s, and a movie version of one of her early novels, 1973’s The Lolly-Madonna War, led her to a career in Hollywood as a screenwriter.

Grafton worked mostly in television from the mid-1970s until the late 1980s, including writing work on the series Nurse (1981-82) and for the TV movie Love on the Run (1985, starring Alec Baldwin).

With the success of her novel “A” is for Alibi, she was able to quit show business and focus on writing novels.

The books were released on a regular schedule; before her death in 2017, she made her way from A to Y in 35 years. She also published a memoir, Kinsey and Me, in 2013.

There is reportedly no “Z” novel in the series. In a Facebook post after Grafton’s death, her daughter Jamie said: “Many of you also know that she was adamant that her books would never be turned into movies or TV shows, and in that same vein, she would never allow a ghost writer to write in her name. Because of all of those things, and out of the deep abiding love and respect for our dear sweet Sue, as far as we in the family are concerned, the alphabet now ends at Y.”

Sue Grafton’s novels about Kinsey Millhone take place mostly in a Santa Teresa, a fictionalized version of Santa Barbara, California in the 1980s.

Something in Common with Sue Grafton