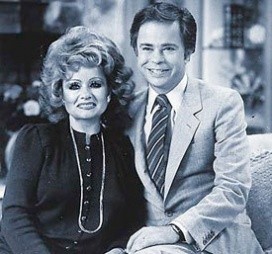 In 1961, at age 18, she married Bible college schoolmate Jim Bakker. The two traveled and led church revivals: he preached while she sang, played the accordion and did puppet characters.

Discovered by evangelist Pat Robertson, they ascended rapidly in the world of televangelism.

At Jim’s initiative, they built a South Carolina religious theme park, Heritage USA, which attracted millions of visitors. All of this collapsed in the 1980’s under the weight of Jim’s widely publicized sexual scandal and his criminal conviction related to fund raising for Heritage USA.

Tammy Faye divorced Jim while he was in prison and married his former best friend, Heritage building contractor Roe Messner, in 1993.

In 2004 doctors discovered inoperable cancer that had spread from Tammy Faye’s colon to her left lung; after battling the cancer for three years, she died in 2007.

She was known as Tammy Faye Messner after her 1993 marriage to Ron Messner… She wrote and spoke publicly of her battles with cancer and a 1980s prescription-drug addiction… Her television appearances after PTL included the syndicated Jim J. and Tammy Faye show (with JM J. Bullock, 1996), and a role in the WB network’s Surreal World (2003-2004)… A feature-length documentary film, The Eyes of Tammy Faye, was shown in 127 U.S. theaters in 2000… According to her website, as a singer she recorded more than 25 albums… Her son Jay Bakker is also an evangelist.

Something in Common with Tammy Faye Bakker