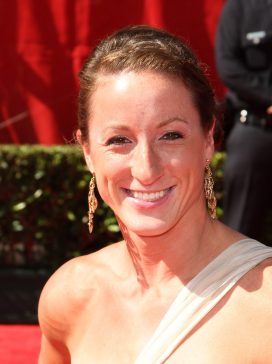 Tatyana McFadden is the wheelchair racer, skiier and Paralympian who became a global star after winning four major marathons in 2013.

Tatyana McFadden was born in Russia with spina bifida and paralyzed from the waist down. She was raised in an orphanage until she was age 6, when she was adopted by an American couple, Deb McFadden and Bridget O’Shaughnessy. She took up wheelchair racing at her new home in Maryland, and by age 15 was so good that she made the 2004 U.S. Paralympic Team, winning a silver medal in the 100 meter sprint and bronze in the 200.

Tatyana McFadden attended the University of Illinois, graduating in 2013 with a degree in Human Development and Family Studies. She played on the school’s wheelchair basketball and track teams, and meanwhile became a dominant force in world wheelchair athletics. Her most notable successes came as a marathoner: in 2013 she became the first athlete to claim four major marathons in a single year, winning the women’s wheelchair division of the Boston, Chicago, New York City and London Marathons. (She went on to win the London Marathon four years in a row.)

Tatyana McFadden made the U.S. Summer Paralympic Team in 2004, 2008, 2012 and 2016, racing at distances from 100 meters to the marathon. Entering the 2016 games she had won 10 Summer Paralympic Games medals, and was expected to compete for medals at seven distances. She also took up cross-country (Nordic) skiing and made the 2014 Winter Parlaympic Team for the Sochi games, winning silver in the one-kilometer sprint. She published an autobiography, Ya Sama! Moments From My Life, in 2016.

Tatyana McFadden is 5’3” tall and weighs 107 pounds, according to Team USA… Her sister, Hannah McFadden, is also a wheelchair racer (and also adopted)… Her mother, Debbie McFadden, was named the United States Commissioner of Disabilities in 1989 by President George Bush the elder.

Something in Common with Tatyana McFadden