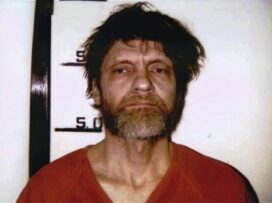 The FBI looks back at a harrowing case

Harvard and the Making of the Unabomber

Maybe he wasn't so crazy?

From 2017: An FBI profiler discusses the case

Ted Kaczynksi was sentenced to life in prison in 1998 for his crimes as the “Unabomber,” an anti-technology terrorist who began a series of sporadic bombings across the United States in 1978.

The first bomb was found in May of 1978 at the University of Chicago: a package sent through the mail to a professor, it exploded and injured a university police officer. Over time the bombs became more sophisticated and fatal, but there was still little known about the bomber’s identity besides a widely-circulated FBI sketch of a man wearing sunglasses and a hood. After 1980 he was dubbed the “Unabomber” because of what seemed to be his primary targets: leading figures at universities and airlines.

In 1994 the Unabomber began sending letters to authorities demanding publication of his “Manifesto,” a 35,000-word document railing against technology. The document’s publication in 1995 by the mainstream media led David Kaczynski to suspect that his brother Ted was the Unabomber, and he turned him in.

Ted Kaczynski was arrested in April of 1996, surprised by federal agents at his one-room shack outside of Lincoln, Montana, where he had been living as a recluse since 1971.

After a few years of legal wrangling, Ted Kaczynski pled guilty to his crimes in 1998 and was sentenced to life in prison. He then began serving out the rest of his life at the “supermax” federal prison in Florence, Colorado.

After Ted Kaczynski delivered his first bombs, police nicknamed the unknown assailant the “Junkyard Bomber” because of his crude, hand-fashioned bombs… Anders Breivik, the extremist who killed 77 people in Norway in 2011, issued his own manifesto which included many phrases borrowed from Kaczynski’s writings… Actor Paul Bettany played Ted Kaczynski in the 2017 Discovery Channel miniseries Manhunt: Unabomber.

Something in Common with Ted Kaczynski