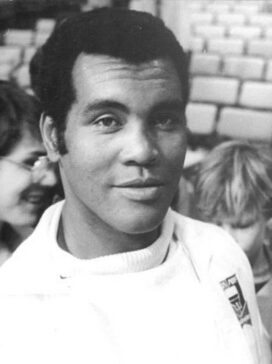 Nifty 2002 profile of Stevenson from The Guardian

2012 report from The Daily Telegraph

The King of Cuba

Boxing.com looks back at his career after his 2012 death

Video of Stevenson in short-shorts, setting ‘em up and knocking ‘em down

Teófilo Stevenson was just 20 years old when he became a Cuban national hero by winning heavyweight boxing gold at the 1972 Olympics in Munich. He was born in Puerto Padre, on Cuba’s northeastern shore, and was 7 years old when Fidel Castro took power in the Communist revolution of 1959. He began boxing seriously as a teen, and rose rapidly to the Cuban national team.  Tall, muscular and cat-quick, he won three Olympic gold medals in all: in 1972, 1976 and 1980 while compiling a reported overall career record of 302 wins against just 16 losses. He remained an amateur all his life, turning down offers of millions from American promoters to turn pro and fight Muhammad Ali. His comment, “What is a million dollars worth compared to the love of eight million Cubans?” cemented his place in the hearts of his countrymen. Teófilo Stevenson retired in 1986 and died in 2012, but remains one of Cuba’s most famous athletes.

Something in Common with Teofilo Stevenson