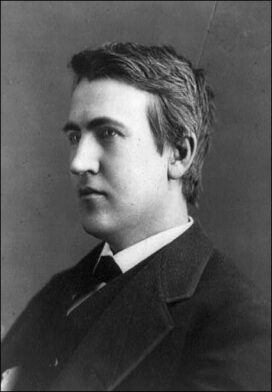 Thomas Edison was the best-known inventor of the early electrical age. His hundreds of inventions made him a giant public figure in American and around the world at the turn of the 20th century.

Among Thomas Edison’s most famous inventions are the first practical long-lasting light bulb and the phonograph; he also helped refine and develop other inventions like motion picture cameras, the stock ticker and the typewriter. Edison is especially known for his work with electricity, and the story of his struggles to find the right filament for the first working light bulb are legendary. By the end of his life Edison had registered 1093 patents and had made millions from his inventions and the businesses he built on them.

Edison’s labs were located in Menlo Park, New Jersey, leading to his nickname of “The Wizard of Menlo Park.” Edison is also famous for being a dogged worker: he often slept no more than four hours per night and made the famous statement, “Genius is one percent inspiration and ninety-nine percent perspiration.”

Thomas Edison became close friends with another inventor/businessman, Henry Ford — the two often vacationed together and had adjoining winter homes in Fort Myers, Florida… Thomas Edison’s name lives on in several modern companies including Consolidated Edison (“Con-Ed”)… Thomas Edison had a public rivalry with another electrical genius, Nikola Tesla, and battled in the marketplace (called the “Battle of the Currents” in the press) with George Westinghouse… Louis Lumiére is another man who helped make movies a part of modern life.

Something in Common with Thomas Edison