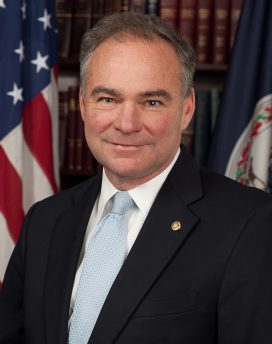 Tim Kaine is the Virginia senator named by by Hillary Clinton to be her vice-presidential running mate in her 2016 run for president of the United States.

Born in Minnesota, Tim Kaine graduated from the University of Missouri in 1979 and added a law degree from Harvard in 1983. He moved to Richmond and practiced law there, specializing in fair-housing issues; he published a law manual on fair housing in 1991. He joined the Richmond City Council in 1994 and served as the mayor of Richmond (1998-2002), as the state’s lieutenant governor (2002-06) and finally as the governor of Virginia (2006-10). He first jumped to national prominence in 2008, when he was named as a potential running mate for Democratic presidential nominee Barack Obama. (Obama ultimately chose Senator Joe Biden instead.)

Tim Kaine has a reputation as a fiscal conservative but a progressive on social issues like education, the environment and health care. Kaine served as chairman of the Democratic National Committee in 2009-10. Virginia law prevents governors from serving consecutive terms, so Kaine could not run for reelection and was succeeded as governor by Republican Bob McDonnell, who took office on 16 January 2010. Two years later, Kaine was elected to the U.S. Senate, taking office in 2013.

Tim Kaine, a Catholic, took a year’s leave from law school to work as a missionary in Honduras. He speaks fluent Spanish… Tim Kaine married the former Anne Holton in 1984. She is also a lawyer. They have three children: Nat, Woody, and Annella… Anne Kaine’s father, Linwood Holton, was governor of Virginia from 1970-74. According to the Virginia state website, Anne is “the only Virginian who has lived in the Governor’s mansion as a child and then as an adult.”

Something in Common with Tim Kaine