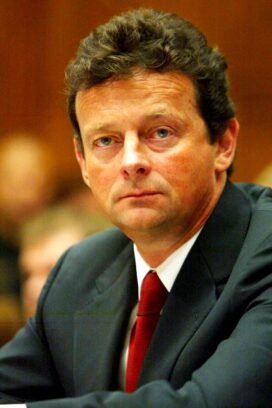 Tony Hayward is 65 years old
Born: May 21, 1957
Birthplace: Slough, Berkshire, England
Best known as: The head of BP during the great Gulf of Mexico oil spill of 2010
Buy from Amazon.com: Books about Tony Hayward

Tony Hayward was the chief executive officer of BP who was forced out as CEO after an oil platform disaster gave the company a black eye in 2010. Hayward was a lifer at BP: he joined the company in 1982, began working as a rig geologist in the North Sea, and spent the next two decades working his way up the ranks. He was named BP’s chief of exploration and production in 2002 and held the post until 2007, when he was named CEO of the entire company. At first widely respected as an oil executive, he became a figure of international scorn after an explosion aboard the Deepwater Horizon oil rig in the Gulf of Mexico in 10 April 2010. The explosion killed 11 workers and opened an unstoppable leak which over the next three months pumped millions of gallons of oil into the Gulf. Hayward and BP were criticized for unsafe drilling practices and for not being able to stanch the well; Hayward earned the nickname “Tone-Deaf Tony” for saying in April that the spill was “relatively tiny” and in May that “There’s no one who wants this over more than I do. I would like my life back.” He got his wish in July of 2010, when BP announced that by “mutual agreement” Hayward would step down as the company’s CEO that October.

Tony Hayward earned a geology degree from Aston University, and PhD in the same subject from Edinburgh University in 1982… Hayward is “a keen fan of London football club West Ham,” according to the BBC… As Hayward agreed to step down, BP announced that his successor as CEO would be an American, Robert Dudley.

Something in Common with Tony Hayward