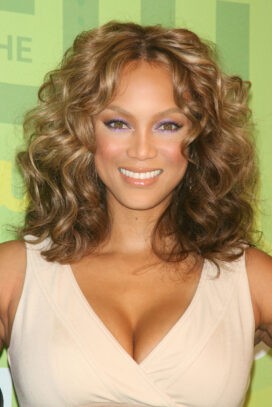 Banks is a former model who created the popular TV reality show America’s Next Top Model and hosted her own talk show in the early 2000s, The Tyra Banks Show.

Banks was a top supermodel of the 1990s, when she became the first African-American model featured on the cover of the Sports Illustrated swimsuit issue.

Famously curvy even by supermodel standards, she was a regular on fashion magazine covers and in the Victoria’s Secret catalog.

Banks also dabbled in acting, with appearances in the movies Higher Learning (1995, with Jennifer Connelly) and Coyote Ugly (2000, with Piper Perabo).

In the new century,  Banks shifted her focus to television. In 2003 she began producing and hosting the reality series America’s Next Top Model.

The show was a hit and spawned spinoffs in Germany, Holland, and many other countries. Banks also began hosting her own talk show, The Tyra Banks Show, in 2005.

Banks announced her retirement from modelling the same year, saying she would focus on her television career. In 2009 she announced that The Tyra Banks Show would end its run after five seasons in March of 2010.

Banks then went back to modeling, did some acting, started a cosmetics company and wrote a novel, 2011’s Modelland.

In 2019, Banks (or BanX, as she dubbed herself) appeared on the cover of Sports Illustrated for the third time, two decades after her first cover.

Something in Common with Tyra Banks