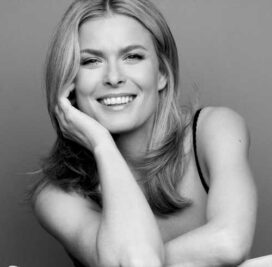 A multi-talented Swede, Vendela Kirsebom joined the Ford modeling agency while still a teenager. Vendela modeled in Europe and the United States for Revlon, Elizabeth Arden and many other products, gaining extra fame in 1993 by appearing on the cover of the annual Sports Illustrated swimsuit issue.

As her fame grew, Vendela branched out into TV, guest-starring on Murphy Brown and Muppets Tonight! On film she made brief appearances in Batman and Robin (1997, as the wife of villainous Mr. Freeze, played by Arnold Schwarzenegger) and in The Parent Trap (1998, as a bridal gown model).

Her 2002 book Model Mommy is a guide to nutrition and exercise for new mothers. In 2007 she published her multi-part Beauty Bible series, with separate entries on (among other topics) hands, hair, and skin.

As a model, she is known simply as “Vendela”; onscreen she is sometimes billed as Vendela Kirsebom or under her married name, Vendela Thommessen… Vendela married Norwegian marketing consultant Olaf Thommessen in 1996; they have two daughters, Julie (b. 1998) and Hannah (b. 2000)… Vendela’s mother is Norwegian, her father Swedish.

Something in Common with Vendela