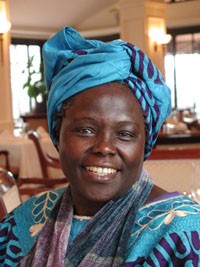 Ecologist Wangari Maathai won the 2004 Nobel Peace Prize for her years of work with women to reverse African deforestation.

Wangari Maathai went to college in the United States, earning degrees from Mount St. Scholastica College in Atchison, Kansas (1964) and the University of Pittsburgh (1966). She returned to Kenya and earned her PhD from the University of Nairobi (1971), then worked as a professor in their department of veterinary medicine.

In 1976, Maathai began promoting a tree-planting program to reverse deforestation and provide firewood for Kenyan women. Soon known as the Green Belt Movement, the program led to the planting of millions of trees and made Wangari Maathai a major political figure in Kenya.

In 1997 she ran unsuccessfully for president and for a seat in Parliament, but in December of 2002 she was elected to Parliament, and in 2003 she was appointed by President Mwai Kibabi to the Ministry of Environment, Natural Resources and Wildlife.

Wangari Maathai won the Nobel Peace Prize in 2004, with the Nobel committee citing “her contribution to sustainable development, democracy and peace.” She was the first African woman to win a Nobel.

Shirin Ebadi became the first Iranian woman to win the Nobel Peace Prize in 2003, the year before Wangari Maathai’s win… Not long after winning the Nobel Prize, Wangari Maathai made headlines with the controversial suggestion that AIDS may have been a man-made biological agent. She later backtracked a bit, saying “I neither say nor believe that the virus was developed by white people or white powers in order to destroy the African people. Such views are wicked and destructive.”

Something in Common with Wangari Maathai