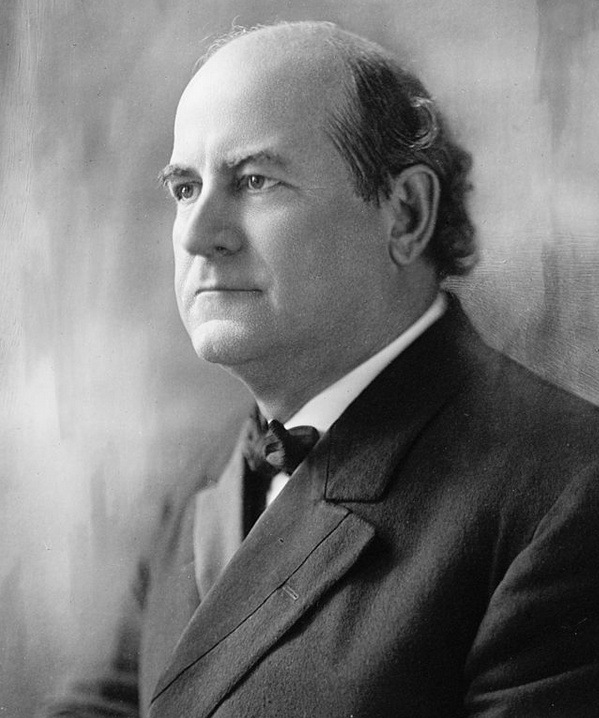 William Jennings Bryan was the United States Secretary of State under President Woodrow Wilson, but it was his politicking against big business that made his reputation and keeps him in the history books.

A celebrity orator at the turn of the 20th century, Bryan crossed the country making speeches defining his agrarian populism, rallying farmers against city folk and workers against Wall Street.

Although Bryan served only four years in Congress (1891-95) and lost his bid for a U.S. Senate seat, he made a speech at the 1896 Democratic convention that brought the house down and, in the end, brought him the Democratic nomination for the presidency.

The speech was called his “Cross of Gold” speech — he winds down his defense of free silver and his attack on the gold standard by saying, “You shall not crucify mankind upon a cross of gold.”

It’s said the crowd gave him a 30-minute standing ovation. He lost the election to William McKinley. Bryan was the losing nominee again in 1900, and again in 1908. A defender of Woodrow Wilson, he served as his Secretary of State (1913-15).

Bryan stayed in the public eye as a lecturer and columnist/editor, but grabbed the spotlight once again in the heavily publicized Scopes trial of 1925.

As the U.S. Secretary of State, William Jennings Bryan oversaw the negotiations for the Panama Canal and had other successes, but he resigned his post in protest in 1915. A pacifist committed to neutrality in World War I, Bryan disagreed with President Wilson’s choice to send a belligerent letter to only Germany (and not Britain, who had been transporting munitions) after the sinking of the Lusitania…Willaim Jennings Bryan, a fundamentalist Christian, assisted in the prosecution of John Scopes, a teacher defended by Clarence Darrow. Bryan famously took the stand to defend a literal interpretation of the Bible and Darrow overwhelmed him. (Scopes was found guilty and fined, a conviction later overturned.) Bryan died five days after the end of the trial, and the memory of him as a predominately religious figure sometimes looms larger than his legacy as a political reformer. Many things he championed, including an 8-hour work day and a graduated income tax, became part of American life.

Something in Common with William Jennings Bryan