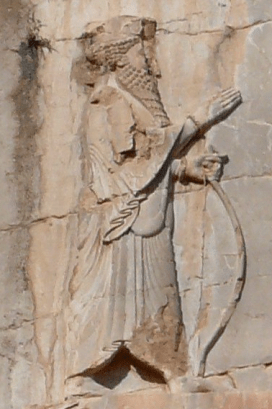 Xerxes I ruled ancient Persia from 485-465 B.C., presiding over its decline from mighty power to fading empire.

His father Darius was defeated by the Greeks at the battle of Marathon (490 B.C.), and 10 years later Xerxes assembled a vast army to invade Greece and avenge his father’s defeat. (The best-known reports on the invasion come from the historian Herodotus.) Xerxes crossed the Hellespont (now called the Dardanelles) and methodically overran Greece.

He won a costly victory at Thermopylae — the famous battle which ended with 300 Spartan warriors defying the entire Persian army in a last battle to the death — and finally reached Athens and sacked the deserted city. But the invasion ended in disaster when the Persian navy was routed by the Greek fleet at Salamis (480 B.C.). Xerxes retreated to his palace in Persepolis, leaving behind an occupying army which was defeated by the Greeks shortly thereafter.

Persia remained a formidable nation but Xerxes withdrew from active life, devoting himself to what Herodotus called “the intrigues of the harem.” 15 years later Xerxes was stabbed to death, probably by his subordinate Artabanus, and was succeeded by his son Artaxerxes.

Xerxes is pronounced ZERK-seez… His life was the inspiration for George Handel‘s 1738 opera Serse (or Xerxes)… One tale from Herodotus has become particularly famous: after a storm on the Hellespont delayed Xerxes from crossing into Greece, the vainglorious king ordered that the waters of the Hellespont be given 300 lashes and cursed as punishment… Xerxes’ elite troops, said to number 10,000 in all, were known as the Immortals… Xerxes also ruled Egypt; he was the third ruler of that country’s 27th dynasty.