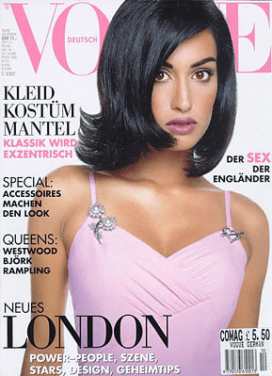 Raven-haired and aristocratic, Yasmeen Ghauri appeared in ad campaigns for Givenchy, Hermes, Versace and other high-end fashion houses in the 1990s. (In modeling circles she was known by the single name of Yasmeen.) Ghauri’s father is Pakistani and her mother German; the family emigrated from Germany to Canada shortly before Ghauri’s birth. She was ‘discovered’ in 1989 in Montreal, and one year later she was modeling for Chanel and becoming known for her mix of Eastern and Western looks. A 1991 story New York Times article on fashion models described her as “the coffee-skinned Yasmeen Ghauri, whose hard-to-get gaze was belied by the ball-bearing swivel of her hips.” She was a regular in Victoria’s Secret catalogs in the 1990s, and showed up in the annual Sports Illustrated swimsuit issue. She is featured in Unzipped, the 1995 documentary about designer Isaac Mizrahi. Yasmeen Ghauri retired from modeling in 1997, according to New York magazine.

Yasmeen Ghauri’s father, Moin Ghauri, “was the imam or religious leader at the ICQ, or Islamic Community of Quebec,” according to a 1992 article in Toronto Now, which also called the ICQ “Montreal’s main mosque.”

Something in Common with Yasmeen Ghauri