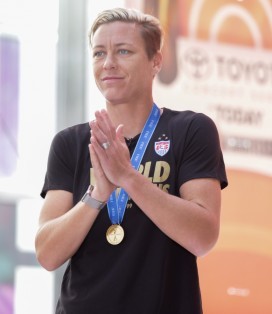 Abby Wambach is the tall, talented and competitive American forward who scored more international goals than any player in soccer history.

The youngest of seven children, Abby Wambach began playing soccer as a child and was named to the U.S. Olympic Development Team as a teen. She played four years of varsity soccer at the University of Florida, graduating in 2002. By then she was at her full height of 5’11” and was known as a dangerous forward with an especially powerful header. Her first international match came against Germany on September 9, 2001 — the first of the more than 250 international matches she would play in her career. She went on to win two Olympic gold medals (in 2004 and 2012) and played for the the United States in four World Cups, in 2003, 2007, 2011 and 2015. Her dramatic overtime header to tie Brazil at the 122-minute mark in the semifinals of the 2011 World Cup became her most famous goal, although the U.S. lost to Japan in the final.

During the 2015 tournament, Abby Wambach was described as “the soul of the United States team” by The New York Times, and the U.S. finally won the World Cup that year. By that point, Wambach had amassed 184 goals in international play, making her the all-time women’s leader. Abby Wambach has also played professionally for the Washington Freedom (2002-03 and 2009-11), the oddly-named magicJack (2011) and the Western New York Flash (2013-14). Among many other accolades, she was named FIFA’s World Player of the Year in 2012. She retired from competitive soccer at the end of 2015.

Abby Wambach is 5’11” tall, according to her biography from the U.S. National Team… She married Sarah Huffman in October of 2013; Huffman was also played soccer professionally but retired in 2014… AbbyWambach surpassed the previous all-time international leader, Mia Hamm, who collected 158 before retiring in 2004… Abby Wambach was arrested in Portland, Oregon on April 2, 2016 and charged with driving under the influence of alcohol. She posted a statement on Facebook the next day saying “I have let myself and others down” and “I take full responsibility for my actions.”

Something in Common with Abby Wambach