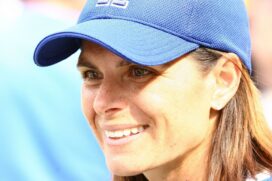 Mia Hamm was the best-known American soccer player of the 1990s. She became the youngest woman ever to make the U.S. national team when she joined the squad at age 15 in 1987. With Hamm as its star, the team won gold medals at the 1996 and 2004 Olympics and claimed the 1999 World Cup championship. Hamm’s talent, good looks and an endorsement deal with Nike combined to make her a familiar face and a popular sports idol. (People magazine named her as one of its 50 Most Beautiful People in 1997.) Hamm scored her 108th international competition goal in 1998, becoming the all-time world leader. She also played for the Washington Freedom of the Women’s United Soccer Association, a league which folded in 2003. Hamm graduated from the University of North Carolina in 1994 with a political science degree. She was elected to the U.S. National Soccer Hall of Fame in 2007.

Hamm and baseball star Nomar Garciaparra were married on 22 November 2003… Hamm was married to Marine Corps pilot Christian Corey, her college boyfriend, from 1994 until their divorce in 2001… North Carolina won four NCAA soccer championships during Hamm’s playing years there: 1989, 1990, 1992 and 1993. Hamm sat out the 1991 college season… After her brother Garrett died in 1997, Hamm created the Mia Hamm Foundation to raise funds for bone marrow research… Another prominent University of North Carolina grad was basketball legend Michael Jordan.

Something in Common with Mia Hamm