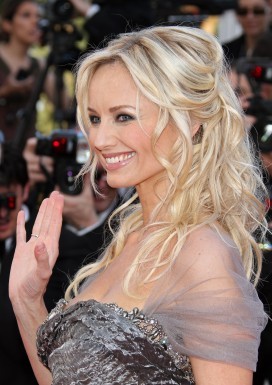 Model Adriana Sklenaříková — also known as Adriana Karembeu — was a superstar in Europe in the early 2000s, where she was known for her ads for Peroni Beer and for Wonderbra, along with covers on magazines like Style and GQ.

Adriana Sklenaříková was born in Brezno, Slovakia, and was studying medicine in Prague when she entered and won a modeling contest, according to the Fashion Model Directory. She moved to Paris and quickly moved up the fashion model ranks, thanks in part to her stylish anatomy:  she is reportedly 6’1″ tall, and her legs (at 49.5 inches/126 centimeters) once were listed by the Guinness Book of World Records as the longest supermodel legs in the world.

Brazilian model Ana Hickmann has been listed by Guinness as having the longest supermodel legs.

Something in Common with Adriana Sklenaříková