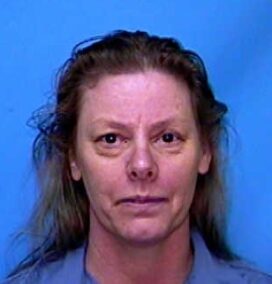 Serial killer Aileen “Lee” Wuornos was executed in Florida in 2002, yet became more famous after her own death thanks to the Patty Jenkins feature film Monster (2003, starring Charlize Theron) and the Nick Bloomfield documentary Aileen: Life and Death of a Serial Killer (2004).

Aileen Wuornos was born in Michigan and abandoned by her parents at an early age. She was adopted by her maternal grandparents, but had a troubled childhood and was pregnant by the age of 14. In the late 1970s she made her way to Florida, where over the next decade she worked as a prostitute and occasionally robbed people to support herself and a young woman she had met named Tyria Moore (the character Selby in Monster, portrayed by Christina Ricci).

In 1989 and 1990, Wuornos shot and killed at least six men; she was finally arrested on 9 January 1991 at the Last Resort, a bar in Harbor Oaks, Florida. She was tried, convicted and sentenced to death, then entered a plea of no contest for five other murders, receiving a total of six death sentences by February 1993.

She was famously — if inaccurately — dubbed “America’s first female serial killer,” and her story became a national sensation when it was revealed that both she and investigators into the murders had sold movie rights within weeks of her arrest.

While on death row, Aileen Wuornos gained supporters who believed her claims that she had killed in self-defense. Arlene Pralle, a “born again” Christian who said that God had called her to help Wuornos, legally adopted Wuornos in November 1991.

An earlier Bloomfield documentary, Aileen: Portrait of a Serial Killer (1992), portrayed Wuornos as a victim of long-standing sexual abuse and, especially, manipulation by the media. As her execution neared, however, Wuornos downplayed the self-defense angle, leaving the world to wonder if she was a victim, a predator or just plain crazy.

Florida governor Jeb Bush ordered a psychiatric exam, after which Aileen Wuornos was deemed mentally competent and executed by lethal injection on 9 October 2002.

Aileen Wuornos had been convicted of armed robbery in 1981 and served 13 months in prison… Aliases she used included Lee Blahovec, Lori Grody and Cammie Greene… Investigators believe that Aileen Wuornos also was responsible for a seventh victim, but she never confessed to the killing.

Something in Common with Aileen Wuornos