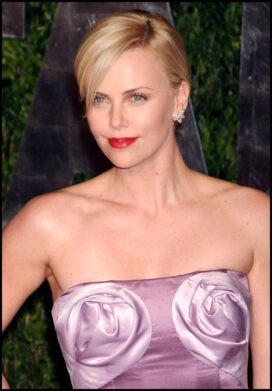 Charlize Theron transformed from onscreen beauty to nightmare as serial killer Aileen Wuornos in the Patty Jenkins film Monster (2003, co-starring Christina Ricci). The film won her an Oscar as best actress and launched her into the top tier of international actors.

Born in South Africa, Charlize Theron was a ballerina and model before getting attention as an actress in the Tom Hanks film That Thing You Do (1996) and the Woody Allen film Celebrity (1998).

She played a New England ingenue in the 1999 art house hit The Cider House Rules, and by the year 2000 she was starring in big budget pictures like Reindeer Games (with Ben Affleck), Robert Redford‘s The Legend of Bagger Vance (alongside stars Matt Damon and Will Smith), and The Italian Job (2003, with Mark Wahlberg).

She won a second Oscar nomination for North Country (2005), but the highly-anticipated Aeon Flux (2005) was raspberried by the critics and spurned by moviegoers. Not to worry: She never stopped working, bouncing back in the 2007 Paul Haggis film In the Valley of Elah and the sci-fi epic Prometheus (2012).

Theron took on a new role — fist-fighting, truck-driving action hero —  in the 2015 film Fury Road, George Miller‘s latest installment in his Mad Max movie series. She then did the voice of Monkey in the animated feature Kubo and the Two Strings (2016). She was nominated for a best actress Oscar in 2020 for playing Fox News star Megyn Kelly in the pulled-from-the-headlines biopic Bombshell.

Charlize Theron was nearly cast to play Nomi, the role later taken by Elizabeth Berkley in the ill-fated movie Showgirls… The gossip sheets like to make hay out of the fact that Charlize Theron’s mom shot and killed her dad back in 1991; the official story is that her dad was abusive. Her mother was never prosecuted… Aeon Flux was a cartoon character from the early 1990s, created by Peter Chung.

Something in Common with Charlize Theron