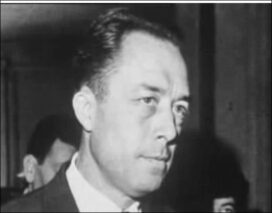 Albert Camus was one of the most highly-regarded French writers while he was alive, and today his books continue to be bestsellers in France and staples of university courses in Western literature and philosophy. Camus grew up poor in Algeria, where he studied philosophy and got involved in the theater and in journalism. In 1938 he moved to France (his father was French, his mother was Spanish) and kept writing essays and plays, earning a reputation among literary and philosophical circles. He was a member of the French Resistance during World War II and co-edited the left-wing journal Combat until 1948. In 1957 he became the youngest-ever recipient of the Nobel Prize for Literature, based on essays such as “Le Mythe de Sisyphe” (“The Myth of Sisyphus,” 1942) and novels including L’etranger (The Stranger or The Outsider, 1941), La Peste (The Plague, 1946) and L’Homme Revolte (The Rebel, 1951). Camus wrote about alienation and moral responsibility and is often compared to his one-time colleague, Jean-Paul Sartre (in the late 1940s their relationship ended over Sartre’s defense of communism under Stalin). Camus described himself as pessimistic about the human condition, yet he ardently sought a positive solution to the “absurdist” position that life is meaningless. While en route to Paris on January 4, 1960, he and his publisher, Michel Gallimard, were killed in an automobile accident.

In 1995 his daughter, Catherine Camus, published his final (and unfinished) manuscript, The First Man.

Something in Common with Albert Camus