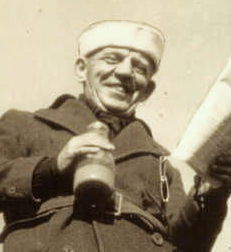 Alvin “Shipwreck” Kelly was the acknowledged master of flagpole-sitting, a nutty public fad of the 1920s.

Alvin Kelly would clamber to the top of a specially-prepared flagpole and remain there on a small platform for days or even weeks, usually as a paid publicity stunt. It was par for the course in Kelly’s scattershot career: he claimed to be a survivor of the Titanic disaster (hence the nickname “Shipwreck”) and worked in shipyards, as a steeplejack and as a stuntman. But when flagpole-sitting became a thing in the fad-addled 1920s, Kelly quickly jumped to the top of the heap while doing his thing across America.

Alvin “Shipwreck” Kelly is not the same man as “Shipwreck” Kelly, the record-setting Kentucky football running back of the 1930s… Various dates of birth have been given for Alvin Kelly over the years. However, according to the 1952 New York Times story about his death, Kelly had “written in newspaper articles and in a pamphlet that he was born on May 13, 1893″… Another NY Times story, on April 21, 1944, reported that the 50-year-old Kelly had been sworn in as second officer in a Merchant Marine vessel… Magician David Blaine performed a stunt reminiscent of Shipwreck Kelly in 2002, standing on a 90-foot pillar in New York’s Bryant Park for 35 hours.

Something in Common with Alvin ‘Shipwreck’ Kelly