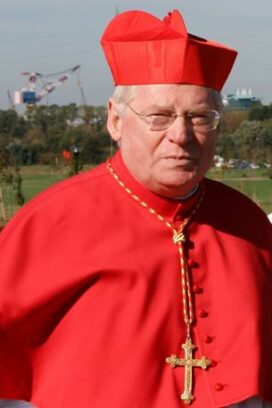 Catholic cardinal Angelo Scola gained international recognition as a possible successor to Pope John Paul II in 2005. Angelo Scola was born in Italy during World War II and became a priest at age 28. He was appointed bishop of Grosetto, Italy, in 1971. Scola spent much of his career as both a priest and an academic; he earned PhDs in both philosophy and theology, and in 1995 was named rector of the Lateran Pontifical University at the Vatican. He became patriarch of Venice in 2002 and was elevated to cardinal in 2003. Scola also has headed the Pontifical Institute on Marriage and the Family and worked closely with the pope on issues of marriage and birth control. As the health of John Paul II failed in 2005, Scola was one of several cardinals mentioned as a successor, although he was not chosen: on 19 April 2005, Germany’s Joseph Ratzinger was elected, becoming Pope Benedict XVI. Scola continued to move up in church circles and was named Archibishop of Milan in 2011, replacing Dionigi Tettamanzi. After Benedict XVI’s resignation in 2013, Angelo Scola was again mentioned as a potential pope;

Pope John Paul I also was patriarch of Venice… In 2004 Scola founded Oasis, a scholarly journal with features on Catholic-Islamic relations. Other contenders for the papacy in 2005 included Nigeria’s Francis Arinze and Italy’s Dionigi Tettamanzi.

Something in Common with Angelo Scola