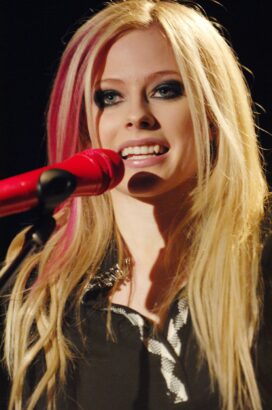 Pop music star Avril Lavigne was originally packaged as a hard-edged Britney Spears for the skateboard set — her website called her “a skater-punk, a dynamic spirit, a true wild child” — before remaking herself as a more mainstream pop celebrity.

Avril Lavigne was born in a small town in Ontario and grew up singing in church. At age 16 she caught the eye of record producers, who had plans to make her a pop star in the mold of fellow Canadian Shania Twain. Instead, Lavigne teamed with songwriters and came up with hit tunes such as “Sk8er Boi” and “Complicated,” the latter of which was featured on the show Dawson’s Creek.

Lavigne was only 17 when her debut album Let Go was released (2002); the album netted her five Grammy nominations. Her next album. Under My Skin, was released in 2004 and reached #1 on the Billboard album charts.

In 2006 she announced a deal with the powerhouse Ford Models agency, and told Harpers Bazaar magazine she was hoping “to do those really beautiful ads with high-end products.” She started her own clothing line, Abbey Dawn, and released a fragrance titled Black Star. Throwing her ‘punk’ tag even further out the window, she released the single “Girlfriend,” a bouncy teen-pop ditty from her 2007 album The Best Damn Thing.

Something in Common with Avril Lavigne