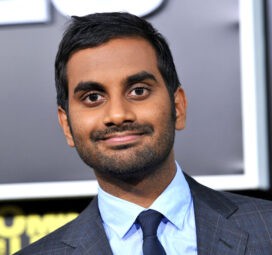 Comedian Aziz Ansari broke through in 2009 with small parts in movies and as a featured co-star of the television sitcom Parks and Recreation (with Amy Poehler. Born and raised in South Carolina (his parents are immigrants from India), he studied business at New York University in the early 2000s, but left school to focus on a career in comedy. Ansari’s success on stage and in short films brought him national attention in 2005, and by early 2007 he was part of the MTV sketch comedy show Human Giant. Specializing in annoying-amusing characters, Ansari popped up in small parts in nearly every comedy venue: on TV shows such as Flight of the Conchords, Reno 911 and Scrubs, in movies such as The Rocker (2008), and in online videos. He continued his run at ubiquity into 2009, appearing in Observe and Report (starring Seth Rogen), I Love You, Man (starring Paul Rudd) and Funny People (starring Adam Sandler). Director/producer Judd Apatow helped Ansari shape his character from Funny People into a series of online videos, and “Raaaaaaaaandy,” an over-exuberant comedian, became one of Ansari’s best known characters. By 2010 Ansari was a popular player on Parks and Recreation and poised to become a leading man in comedy films.

Something in Common with Aziz Ansari