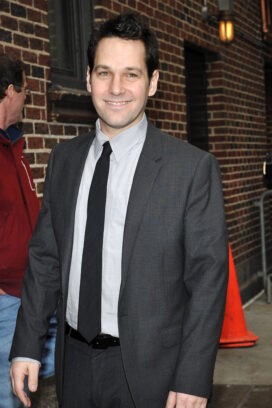 Comedic actor Paul Rudd’s boyish charm has made him a popular sidekick in the movies since he first broke through as Alicia Silverstone‘s stepbrother Josh in the 1995 hit Clueless. In 2015 he made it to the big screen as the Marvel Comics hero Ant-Man.

A Kansas City kid, he got into the movies by way of commercials and television — before Clueless Rudd was a regular on the sitcom Sisters between 1992 and 1995. A little too hunky to be the goof and a little too goofy to be the hunk, Rudd has often played the smart-aleck pal to lead players.

Although he’s appeared in dramas, including 1996’s Romeo + Juliet (with Leonardo DiCaprio and Claire Danes) and 1999’s The Cider House Rules, Rudd is best known for comedy. He’s been in the feature films Anchorman: The Legend of Ron Burgundy (2004, starring Will Ferrell), The 40 Year Old Virgin (2005, starring Steve Carell) and Night at the Museum (2006, starring Ben Stiller). On the small screen he appeared in several episodes of Friends, ending the show in 2004 as husband to Phoebe (Lisa Kudrow).

Rudd is an Apatow regular who was not in the 1999 TV series Freaks and Geeks… He has a running gag with Conan O’Brien‘s show — when he shows up to promote a new movie Rudd shows a clip from the 1988 movie Mac and Me instead.

Something in Common with Paul Rudd