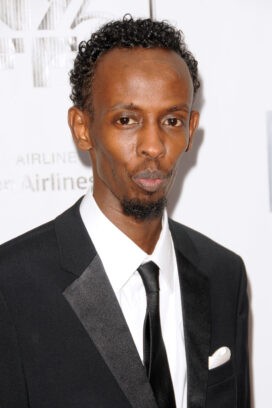 Barkhad Abdi is the former limo driver who was Oscar-nominated for his very first acting role, in the 2013 film Captain Phillips (directed by Paul Greengrass).

Barkhad Abdi was born in Mogadishu, Somalia, but his family fled the civil war there when he was age 7. After 7 years in Yemen, the family relocated to Minneapolis, Minnesota, which had a thriving Somali community. That’s where he was working as a limo driver when he went to an open casting call for Captain Phillips, which was looking for actors to play the film’s desperate Somali pirates. He and three friends were hired and became key players in the film, opposite hero Tom Hanks.

The film was a hit and Abdi was nominated for best supporting actor awards in the Golden Globes, the Screen Actors Guild Awards and then finally the Academy Awards. He told The Los Angeles Times that he would move to Los Angeles and try to continue his acting career.

Since then, Barkhad Abdi has appeared in the films Eye in the Sky (2015, starring Helen Mirren), The Brothers Grimsby (2016, starring Sacha Baron Cohen) and Extortion (2017).

Something in Common with Barkhad Abdi