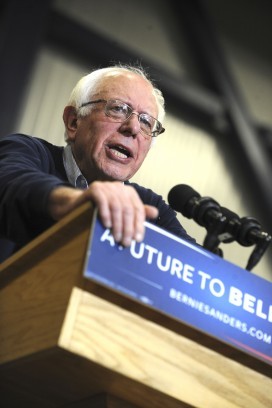 Bernard “Bernie” Sanders is the independent-minded politician who has represented Vermont in Congress for more than two decades and is running for president in 2020.

The son of Polish immigrants, Bernie Sanders grew up in Brooklyn, attended Brooklyn College for a year and then switched to the University of Chicago, graduating with a B.S. in political science in 1964. He moved to Vermont and worked at a variety of jobs, including carpenter and producer of educational films and filmstrips, but he always had his eye on politics: he ran unsuccessfully for the U.S. Senate in 1972 and 1974, and for governor in 1972 and 1976, each time as part of the small anti-war Liberty Union Party. He then turned independent, and that role grew into a major part of his political persona: the free-minded, rumpled and irascible populist, beholden to no party. That position turned out to be a bonus in Vermont, where old-fashioned Yankee conservatives mingled with green-minded liberals.

He was was elected mayor of Burlington, serving from 1981 until 1989, and the next year he finally won election to Congress as Vermont’s first and only U.S. Representative. He served 16 years in that post — “the longest serving independent member of Congress in American history,” according to his official Senate biography — before being elected to the Senate in 2006. Sanders has caucused with the Democrats while remaining well to the political left of both parties: he has voted consistently against military action and tax cuts and in favor of social programs like Social Security and Medicare.

Sanders was reelected to the Senate in 2012, and in 2015 announced that he would run for the Democratic nomination for president in 2016. He established his bona fides by soundly beating Hillary Clinton in the year’s first primary, in New Hampshire, but eventually lost the nomination to Clinton (who went on to lose to Republican Donald Trump in the general election).

Bernie Sanders announced in February of 2019 that he would again run for the Democratic nomination for president in 2020.

Bernie Sanders said he would run for president as a Democrat in 2016 because it would take an “enormous” amount of time and money simply to get on the ballot nationwide as an Independent… Sanders announced his presidential run on 30 April 2015… His brother, Larry Sanders, moved to the United Kingdom as a young man and was a Green Party member and county councillor there until his retirement in 2013. He is no relation to Larry Sanders, the sitcom character created by comedian Garry Shandling… Bernie Sanders has one son, Levi, from his first marriage in the 1960s. That marriage ended in divorce. He married Jane O’Meara Driscoll in 1988; she became president of Burlington College in 2004… Bernie Sanders is no relation to Harland Sanders of Kentucky Fried Chicken fame.

Something in Common with Bernie Sanders